When Promoting Nakedness A Snapshot Is Worth A Thousand Words 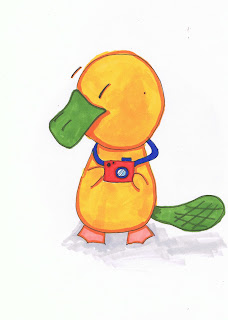 The Bare Platypus finds it somewhat ironic that he spent years and years learning how to construct sentences and paragraphs in high school, college, and grad school.  And now... many of those skills are becoming obsolete.  Let me explain further.

This blog allows for writing essays and lengthier articles.  However, in the world of social media-- be it Facebook, Twitter, Tumblr, Pinterest, or Instagram, messages are served up in bite sized morsels. Usually conveying one simple thought or idea.  Often juxtaposed over a photograph or illustration that emphasizes the point.

Think about how many of these eCards, memes, advertisements, or whatever you want to call them, that show up in your Facebook feed each morning.  No expository writing on the level of an H.L. Mencken, a James Thurber, or an E.B. White there.  Just a picture and a few quick words to get the viewer thinking.  Then it's on to a hundred other posts in the news feed, on to breakfast, and the morning radio show..

Now, this blog post is not meant to be a Luddite's manifesto against the way things are going in journalism.  Just a realization that the depth of information once found on a full website, or feature length article just isn't the way folks exchange information in the marketplace of ideas much anymore.  That means that nudists must be prepared to convey messages in new ways.  On Tumblr it's not much of an issue... Tumblr is liberal about depicting nudity..We note, somewhat wryly, that this may attract those who merely collect images of nude people rather than reaching the "outside" world.with the message of nudism.

We're interested in what it will take to get nude messaging in front of more of the mainstream viewership. We get religious, political, humorous and slice-of-life messages.  We get recipes, celebrations of sporting events... even see what our former classmates had for dinner last night?  Couldn't we do a better job of getting people to think about getting naked?  True, many social media have policies that ban any nudity and get Draconian about enforcing those policies. But surely we can do more within the parameters we do have.

We don't use much in the way of images on this site now.  But we may have to work on generating more of these "meme shots" than we have in the past if we wish to remain relevant in the fast-paced dialogue of today.
Posted by Unknown at 3:02 PM No comments:

Nudity and Autism: Many Visits to the Bare Platypus Pages on that Subject this Week

Not sure what brought on a sudden interest in a topic that the Bare Platypus has been posting about for years, but this week our Nudity and Autism Page got substantial traffic.  To commemorate the increased awareness, we're posting the ecard below which we have seen elsewhere on the net.

We welcome thoughts and comments from those of you who deal with autism yourselves or in your families. 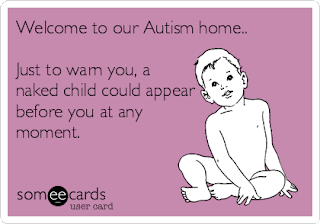